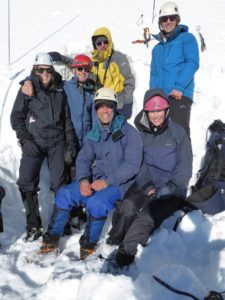 Adventures were had and memories made during our Taranaki snow cave weekend on 27-28 August! With 13 of us in total, 6 went high into Hongis to build their cave whilst the other 7 stayed low in Hongis to build three small 2-3 person caves. The snow cave digging/construction was tougher than we thought. Yet after an afternoon of sweaty perseverance, much shovelling of snow and laughter in cold windy weather, our caves looked great with tunnel entrances, kitchenette areas for dinner, platforms for sleeping and beautifully smoothed walls to stop any drips. Once dinner was cooked, everyone settled into their many layers of thermals and sleeping bags. Despite the chilly howling wind outside in the dark night, the upper cave experienced cosy temperatures of some 4 degrees Celsius and were soon asleep about 9pm. Aaaahhhh. However, the lower caves remained awake for a while and saw that same howling wind blow huge snowdrifts into their caves – by 9.30pm their cave entrances were almost completely snowed in! So the lower caves team decided to abandon to the safety of Tahurangi Lodge rather than spend the night snowed in. Abandoning the lower caves into the dar 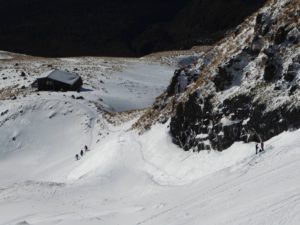 k night of such strong winds & snowdrifts was no easy feat and the team worked incredibly well together to get back safely to the lodge for a cosy night. The upper cave team woke the next morning to a completely snowed in cave entrance which took one and a half hours to dig out! Sunday was a blue sky day and a hearty breakfast and swapping of stories back at the lodge completed our snow cave adventure. A huge thanks is extended to trip leaders Alec Heilbron and Greg Banks who made this trip happen – this was an awesome weekend and certainly one we’ll want to have on our trips agenda next winter! 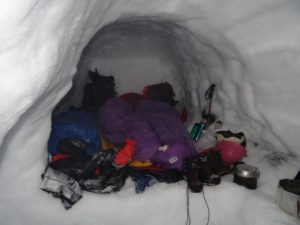