During the winter months the snow line is below the Lodge and visitors will require mountaineering skills and equipment to safely access the Lodge. If you are unsure please contact the Lodge Booking Officer. 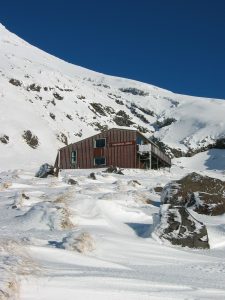 Tahurangi Lodge is located above the bush line in an alpine environment at 1,500m above sea level on the north side of Taranaki Mounga. To access the Lodge you have to walk from the road end at the North Egmont Visitors Centre car park. With average fitness this walk will take approximately 1½ hours. The lodge is a fantastic base from which to explore the Taranaki Mounga alpine environment and enjoy the outdoor activities such as hiking, rock climbing in summer, ice climbing in winter and skiing.

The Lodge sleeps 26 people in two bunk rooms. Guests need to bring their sleeping bags and food. The Lodge has electricity and a kitchen equipped with stoves, microwave ovens, fridge, cutlery, pots, pans, plates and cups etc.
Tahurangi is well-positioned to allow club members to take advantage of climbing and skiing opportunities on the mountain.
Sleeping up to 26 Tahurangi Lodge has become a home away from home for many club members.

The lodge was refurbished in 1998 and 2013 contains many modern amenities.

Tahurangi Lodge is available for its members and affiliated groups. The Alpine Club always reserves spaces for members. Subject to this the general public may use the lodge if booked online in advance. Bookings are subject to confirmation.

Members may apply for an eKey by completing the standard Membership Application Form and in particular tick the option for an eKey and forward to the Club Treasurer.
Note that by having access to the Lodge you have the responsibility to ensure all procedures are followed with security kept at the top of the list.

Large Parties: If you a planning a booking for a large party, please ensure you book early.

The Lodge Committee takes care of all maintenance on Tahurangi Lodge. If you have any ideas, want to help out, or have found maintenance that needs attending to, please contact Lodge Maintenance Officer

The origin of the carving that currently adorns the northern wall of the lodge lounge.

Its carved top-knot is unusual; not in keeping with the traditional peaked forehead associated with Taranaki carving. The reverse of the carving also carried a signature “J”. Experts from the Puke Ariki could not identify the carver on the basis of style.

Ray Watembach a local historian of Waitara, associated it with the recovery of a number of carvings from the Waitara swamps in the 1960s. Additionally a former member of the Taranaki Alpine Club informs me he himself recovered the carving from the swamps behind the Owae Marae during the 1960s. Ray states that this particular carving was a panel of carved totara left unfinished by the carvers of the Te Ikaroa a Maui, the meeting house at Owae Marae, during the early 1930s.

Among the principle carvers of this house was Pine Taiapa of Ngati Porou, who also trained local carvers during the construction of this house. His east coast influence may explain the unusual top knot. Ray believes this carving was used in instruction. In the Taranaki region carvings were traditionally placed in swamps to hide such taonga from invading enemies; the swamp hid the carving from enemy view and the anaerobic nature of wetlands preserved the timber. However carvings, particularly larger ones, were also placed in the swamp for the duration of their work because the damp timber became easier to carve, which may explain the location of this carving in the Owae swamps.

The carving was an incomplete rough out and originally comprised two figures, aligned toe to toe. Ray requested permission to remove the piece, which was separated into two individual carvings and completed by the late Dick Jonas. Jonas was a well regarded amateur archaeologist whose expertise clearly extended to wood working as well. The lodge carving was named Tahurangi, after the Maori chief reputed to be the first man to have climbed the mountain, and presented to the lodge by Ray Watembach for the opening of the new lodge in 1968. The carving has a sister figure named Minarapa, re-worked from the other half of original panel. This currently stands at the entranceway to Ray’s house.