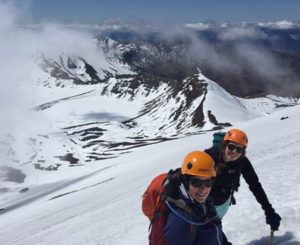 A full trip of 22 was unfortunately reduced to 13 when atrocious weather forced us to go for our reserve weekend of 23-25 Sept. Well done to all of those that re-organised travel plans to make it! With increasing showers forecast as the Saturday progressed, we started early from Mangetepopo car park at 7.30am and headed into a warm yet slightly overcast and drizzly valley toward Soda Springs and the infamous loo stop. The weather seemed to lift a little and clothing layers were removed as we warmed up walking up Devil’s Staircase. But you guessed it, those layers were back on as we reached the saddle and temperatures dropped! South Crater was very wet and slushy and as we hiked up toward Red Crater in increasing wind, rain and lowering visibility, we wondered if and when snow or ice might appear. Finally the snow appeared, with white out conditions to accompany, and with frequently changing snow depths over a hard ice base the crampons were finally on as we headed to the summit. White out continued at the summit and despite no views, it felt amazing to be the only people up there. After a good feed, we went down the steep deep snow slope directly into South Crater and made our way back to
Mangetepopo car park. Woah, what a day! Which was of course finished off with good food & beer in front of the fire at Tussocks. A huge thanks to our Trip Leader Scott Chamberlain who, with the help of Murray Peat and Mike Bone, helped ensure a safe trip and awesome experience for all. Next year we’ll be going for Ruapehu Crater Lake as our winter weekend away – keep an eye out for dates!