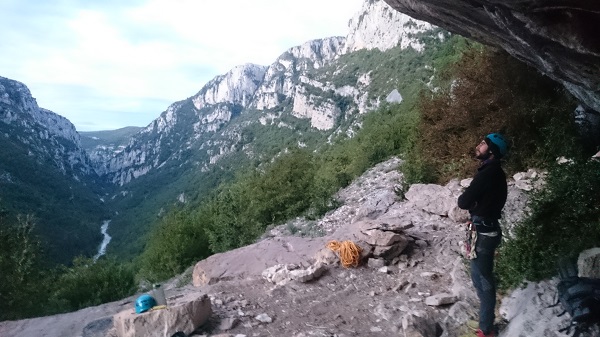 By Chris Hayes, with editing by Lucy Blackbourn

It’s September, and Jason and I are in the Gorges Du Verdon with every intent of enjoying the fine French limestone. Of course, we want to jump on a classic Verdon multi pitch, so we look through the guidebook and find one; 160m, grades all inside our abilities, and relatively easy access. Sounds perfect.

To get to the climb, we have to walk about 50m from the road to the gorge rim, find the rappel anchor, and rappel down to the starting ledge. It took us nearly two hours of wandering around on the gorge rim just to find the rappel point, not quite where the guidebook suggested. An hour later and we’d made the two 60m rappels required to get to the ledge and found the start of the route, or at least what we thought was the route…

It’s noon, and we’re are finally starting the route. Great. Jason leads the first pitch and it goes for him, while I dog up it wondering what’s happened to me. The second pitch is mine and I get going. It’s horrible. There’s dirt all over everything, loose rocks, and the climbing is much harder than I expected for the grade we were meant to be on. I wind up aiding a large section until I reach a gap in the bolts; I can’t climb it free and I can’t reach the next bolt. Jason steps in with his sport climber’s guns to pass the section and get us to the next anchor. Pitch three goes in a way quite reminiscent of pitch two. 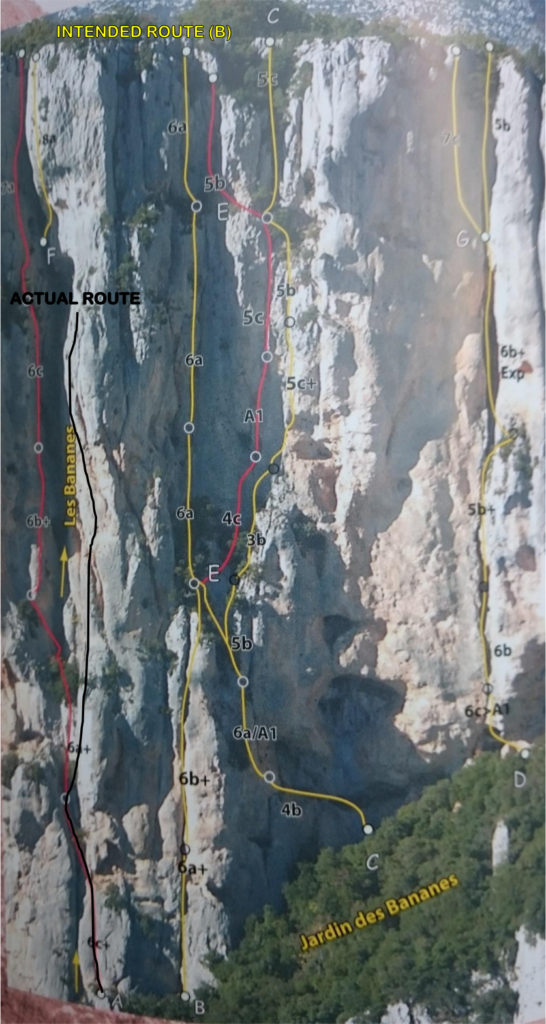 Pitch four and I start out leading again, to now familiar results; choss everywhere, aiding, generally hating the climbing and rueing the decision to come to the Verdon. I reach another impasse and return to the anchor, again. Jason ties in to the sharp end and sets off up to also find it less than ideal, but steps up to the plate and traverses into an area that makes alpine choss look like solid granite. At this point it’s about 5:30pm, we’re somewhere around 230m above the gorge floor, with 180m down to the nearest escape ledge and a short 40m to the sweet, sweet freedom of the gorge rim.

Section passed and back on the bolt line, Jason finds new difficulties; after numerous 5m falls at one move, he returns to the anchor to consider our options. The bolts are too far apart to aid through directly, we’ve finally realised we aren’t on “Belle Fille Sûre”, we have no idea what is beyond this section, we have about two-and-a-half hours of light left, and we’re buggered. A hasty retreat is decided upon, with the hope that we can scurry out of the gorge up what looks like an escape ramp nearby.

I aid back up to our high point with a begrudgingly chosen leaver biner, and set up for a single point lower. Back at the anchor, we set up our first rappel (off another leaver) and get going. A second rappel has us at the starting ledge, and it looks like a third will have us on a ledge we can escape off.

Off I go down the third rappel, passing a couple of mysterious tat stations in bushes half way down. Getting suspicious, I flick my rope tails out to check the ground distance.  It looks like I’ll be able to step off the rappel onto a small ledge just above the ground. Thinking perhaps others just had 50m ropes, I continue down my line to a metre from the end of the ropes, noting a bolt line about 10 or 12m out to my left.

I’m still 5m from the ground, the small ledge is out of reach, and the ground is far too broken to consider a jump. Looking around for options, I see some trees to my left, with the bolt line past these. After a quick survey of the nearby tree, I decide the safest option is to get to the bolt line, so I set about to begin an ascent of the ropes. Reaching for my long prusik, I realise that Jason still has it, 60m above me. A couple of sewn slings later I have a useable foot loop, and I stand up to clip my belay device from “rappel” to “auto-block” mode. Fifteen metres of ascent and endless running back and forth across the wall and I’m hanging from a single bolt, where Jason joins me.

After an eternity of pulling, the ropes are finally touching the ground. Jason goes first, and runs along the ledge to check our escape line out of the gorge in the last ten minutes of light while I coil the ropes – it’s now past 8:00pm.

The escape line we thought we spotted from high on the route ends in a bluff to the gorge rim, leaving us with only the option of descent to the foot track next to the river at the gorge floor. Ever positive, we put our (already fading) headlamps on and start descending, only to get bluffed out at every attempt. Left with few options in that area, we begin walking along the ledge in the direction of the nearest road head.

We reach the end of the ledge two hours after our touchdown, still with no obvious line to the gorge track through the bluff system. After a short discussion, we agree it safest to spend the night in a nearby cave, rather than make unknown rappels in the dark.

We set up in the cave; jackets on, ropes on the ground, and each picking spots with dignified separation to spend the night. Half eleven rolls around, and we’re both freezing. Our social conditioning goes out the window and we start man-spooning for warmth; one rope as a seat, one as a poor blanket, and our backpacks to lean on.

By the time 2:00am arrives, we’re both shivering again, and Jason remembers his lighter. A few minutes of scurrying around and we have fire! Cue man hugs, uncoordinated high fives, and Castaway-esque yelling of “fire”. Alternating shifts of fire tending and sleeping on the adjacent rock brings us to dawn. Tired, dusty, reeking of wood smoke, but alive and cheerful.

We start looking around in the daylight, and a few short minutes later we find a way to easily walk down to the gorge track, a convenient 20m from where we spent the night. Hitting the gorge track at 8:00am starts us on an hour’s stroll out including a couple of long tunnels, and leaves at the roadhead with only a 14km walk left to get back to the car above the gorge. Luckily for us, salvation from the impending ordeal was provided in a couple of Marseillais climbers, snack bars, and a ride to our car.

Two days later, while relaxing in camp, the camp manager dropped by to say hello. After hearing our story, she just shrugged and said “this is the Verdon”.

We got the adventure we came for.